First, thank you so much for checking out my site.  While the site was originally created as a way to reach-out to friends and family and explain “what’s wrong with my hips,” it is now being redeveloped as a resource with information relating to various types of hip problems one may encounter.  The blog section of this site is up to date through March 5, 2015 but is currently on a hiatus.

My hip surgeries / procedures have included:

The PAO, SDD and bilateral hardware removal, SDD and PAO were all performed at Hospital for Special Surgery (HSS) by Dr. Ernest Sink (a fantastic surgeon!).

My arthroscopic hip surgery of my right hip was performed by a different surgeon at Lenox Hill Hospital . 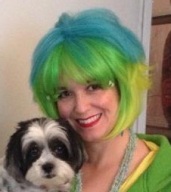 A little bit about me (Emily)

I am a 37 year old female, living in NYC with my husband, dog and cat. I have (technically had since I’ve had the surgery to fix it!) developmental dysplasia of the hip (DDH – see the drop down under ‘How I’m Broke’) in my right hip and acetabular retroversion (again, check out the ‘How I’m Broke’ drop down) in my left hip, and a whole lot of impingement in both hips.

Why did I create a site?

Hip dysplasia is something people only hear about in relation to dogs. Or babies. Or baby dogs. While hip dysplasia actually affects 1 in 1,000 human births, in most instances its caught and treated in babies. When its not caught, most people just live with it and never have any problems until they’re in their 50’s or 60’s and end up getting a hip replacement. However, there is this small group of people, mostly women, who hit their twenties or thirties and their hips start hurting. Badly. Things start falling apart and suddenly they’re facing issues they never imagined they’d think about until they were much older.

Similarly, diagnosis for femoracetabular impingement have been on the rise in the last few years — not so much because it wasn’t a problem in the past but more because there are new technologies that permit doctors to identify the underlying causes of hip pain.

When I found out I had dysplasia and impingement, I wanted to learn everything I could.  However, I could not find a comprehensive website that explained the various hip problems and procedures.  This site is a way to educate and explain what I have learned (which can be very confusing to describe).

My right hip started hurting in June of 2011. Following my arthroscopy in January 2012, my hip began hurting again and my left hip started hurting as well. Some days it was not too bad, other days it was awful. It was simply a fact that pain in my hips was never going away unless I had surgery to change the structure of the joints. If I had waited too long, osteoarthritis would have crept in and I would no longer have be a candidate for PAO and Surgical Dislocation surgeries. So I figured I should go for it. It also helps that I have an amazingly supportive work environment that makes it possible for me to work from home while recovering.

OK, but why ‘Dramatically Hip’?

I work in theatre and have hip problems (see, “dramatically” and “hip” = dramatically hip). This is all very exciting, isn’t it?

Get the word out!