Unless you are well versed in anatomy, I would HIGHLY suggest you first check out this animated video that shows the anatomy of a hip: 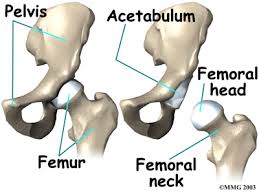 RETROVERTED ACETABULUM: Acetabular Retroversion is a little-known variety of hip dysplasia.  In the normal hip, the alignment of the opening of the acetabulum is anteverted (i.e., it inclines or toward the front of the body so that if you were standing in front of it, you could see part of the inside of the cup).   You can see this in the photo to the right.  The inside of the ‘cup’ of the acetabulum is visible when looking at it face on.  When the acetabulum is retroverted, it inclines or opens toward the posterior (i.e., the back of the body).

It’s harder to see it on an x-ray because you are looking through multiple bones.  However, in the x-ray to the left, you can see a ‘normal’ anteverted acetabulum.  The green line shows the front edge of the acetabulum while the yellow line shows the back edge.  You have to sort-of imagine that the femur (leg bone) is not in the way to see it correctly.  If you were to imagine that the femur were removed, you would be able to see into the acetabular cup (like the drawing, above) because it opens toward the front of the body.

The x-ray on the right shows a retroverted acetabulum.  Again, the green line is the front edge of the acetabular cup and the yellow line is the rear edge of the cup.  The entire acetabulum has been rotated forward so that there is excess coverage of the femur in the front of the cup and not enough coverage in the back.  If you were to imagine that the femur were removed, you would NOT be able to see into the acetabular cup because it opens toward the back of the body.

Note that it is alternatively possible to have an acetabulum that is too anteverted, where the acetabular cup tips too far forward.  If you have excessive acetabular anteversion (i.e., greater than ___ degrees anteverted), you may have labrum damage to the posterior edge of the acetabulum. 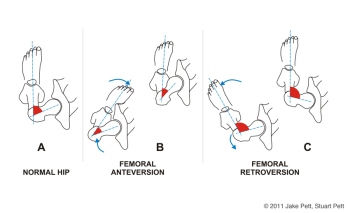 RETROVERTED FEMUR: In addition to, or instead of, having acetabular retroversion, you may have a retroverted femur.  In the normal femur, the alignment of the femur is anteverted about 10-15 degrees (i.e., it actually angles toward the front of the body).   When the acetabulum is retroverted [less than 0], it angles backward, toward the posterior (i.e., the back of the body).

THIS PAGE IS IN THE PROCESS OF BEING UPDATED.  PLEASE CHECK BACK.

Want to learn more?  Check out this site: http://musculoskeletalmri.blogspot.com/2009/01/acetabular-retroversion-and-library-of.html

Still interested?  How about this study from The Journal of Bone and Joint Surgery!  Retroversion of the Acetabulum

If you have any additional information on Acetabular Retroversion, PLEASE contact me — this is an area that I find very confusing and about which not a lot has been written and I would appreciate guidance toward more reference material.

Get the word out!